Fayed was born in Alexandria, Egypt. He was the eldest son of billionaire Mohamed Al-Fayed, former owner of Harrods department store and the former owner of Fulham Football Club and the Hôtel Ritz Paris.[1] His mother was Samira Khashoggi, sister of Saudi Arabian-born billionaire arms dealer Adnan Khashoggi.[2] Fayed was a student at Collège Saint Marc before attending the Institut Le Rosey in Switzerland.[3][4] He also briefly attended Sandhurst.[1] After completing his education, he served as an attaché at the United Arab Emirates Embassy in London.[4]

Fayed was the executive producer of the films Chariots of Fire, Breaking Glass, F/X, F/X2, Hook, and The Scarlet Letter. He also served as the Executive Creative Consultant for the F/X television series. Fayed also worked for his father on Harrods’ marketing.[5]

In 1986, Fayed married model Suzanne Gregard, but the couple divorced after eight months of marriage.[5]

In July 1997, Fayed became romantically involved with Diana, Princess of Wales. At the time of his romance with Diana in the summer of 1997 Dodi was engaged to an American model, Kelly Fisher. Dodi had bought a house in Malibu for himself and Fisher with money from his father.[6][7][8] Fisher subsequently announced that she was filing a breach of contract suit against Dodi, claiming that he had “led her emotionally all the way up to the altar and abandoned her when they were almost there. He threw her love away in a callous way with no regard for her whatsoever”.[9] 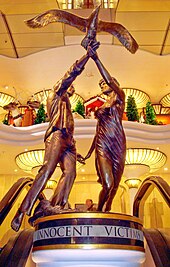 “Innocent Victims”, the second of two memorials in Harrods.

In the early-morning hours of 31 August 1997, Diana and Fayed died in a car crash in the Pont de l’Alma underpass in Paris. They had stopped in Paris en route to London, after having spent nine days together on holiday in the French and Italian Riviera aboard his family yacht, the Jonikal. Neither Fayed nor Diana was wearing a seat belt. Investigations by French and British police concluded that their chauffeur Henri Paul was driving under the influence of alcohol and prescription drugs, and paparazzi chasing the couple are also believed to have contributed to the accident.[10][11] Fayed’s father, Mohamed Al-Fayed has claimed that the couple were executed by MI6 agents.[12] Fayed’s former spokesman Michael Cole has claimed that the couple had become engaged before their deaths.[13]

Fayed was originally interred in Brookwood Cemetery near Woking, Surrey, but was moved to the Fayed estate in Oxted, Surrey.

So if you didn’t see the release
http://www.youtube.com/watch?v=xCxkLq4-UDE[/embedyt]

Tags: Diana. Dodi, PM of the UK, princess, Teresa May

whoa, is this Diana OR the sister of Parker-Bowles?

whoa, is this Diana OR the sister of Parker-Bowles?