As I called it!  I said she was a fraud.  Everyone gave me shit about it, so where are those naysayers now?

I SAID SHE WAS ELLISON’S DAUGHTER. Look who gave her the first 100 Million.  HER FATHER!
So all those who bashed me can go suck it!

The company is now bringing its medical testing technology to market—and it’s a game changer.  But who’s playing who in that game? 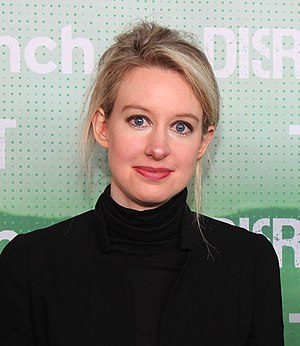 I had looked at Elizabeth Holmes a while back when her company was causing a bunch of chatter and that she was not answering direct questions from the media.  I found it fitting the pattern these liars follow in that everything was so outrageously hyped along with her age and her genius which is now turning out to be just part of the script.

The following is all lies!

Elizabeth Anne Holmes (born February 3, 1984) is an American businesswoman, who is the CEO and founder of Theranos, a privately-held blood test company.[1][2] In 2016, the Centers for Medicare and Medicaid Services barred her from owning or operating a diagnostic lab for two years.

Holmes was born in February 1984 in Washington, D.C. Her father, Christian Rasmus Holmes IV, worked in the United States, Africa, and China in governmental agencies such as USAID.[3] Her mother, Noel Anne (Dauost),[4] worked as a congressional committee staffer. She has a brother, Christian Holmes V, who is the director of product management at Theranos.

Her parents’ work in disaster relief encouraged Holmes to pursue science and service early on.[5] When Holmes was nine, her family moved toHouston and then China, where—she later claimed—she started a business selling C++ compilers to Chinese universities.[6][7] Growing up, her family moved frequently, which made it challenging for Holmes to make close friends.[4] In a 2014 interview, she described herself growing up as having been a “happy loner.”[4]

After graduating from St. John’s School in Houston in 2002, Holmes enrolled at Stanford University to study chemical engineering, but she left Stanford prior to completing her undergraduate degree.[8]

Now for the truth.

But back when I looked at her I didn’t recognize her face as my photographic memory would have clicked and I would have known if I had seen here before.  But as I said I was drawing a blank.

But that all changed after I started looking at Larry Ellison for an unrelated event that I believed I saw him playing a role in, and as I always do, I make an effort to find photos of the spouse and if they have children.  The second I saw his filmmaker daughter, my photographic memory threw a flag.  So knowing that Elizabeth has a unique voice I thought this might be an easy one to confirm.  I was correct.

When you watch that video, please remember the psychological damage they cause by making the public believe that this 30 years old could actually do what they claim she had done WITHOUT ANY HELP FROM HER BILLIONAIRE father

Now the big question, what about all those investors who gave their money thinking they were investing in a legit person and company not come to find out it’s a scam.