THE GODMOTHER OF ROCK N ROLL

This person was told to us to be a witness to the murder of Officer Tippit, who we have identified as really being Carl Perkins one of the Rock n Roll music legends. Who was from Tiptonville Tennessee. This is where he gets the Tippit name.

Sister Rosetta Tharp is an associate of Perkins as well as all the other Hall of Fame Musicians from the early days of the music scene, that I have identified as playing roles in the events related to the JFK Assassination.

ALMOST EVERY witness that we have been shown was involved in that event I have identified as being in one of more of the following organizations.

I will be releasing a video documenting all the musicians involved.  Plus who the Dallas officials are as well, in the next few weeks.

All the Oswald Co Workers are in this video.  Including Little Richard (see if you can figure out which one he is.)

At the Schoolbook Depository

AKA Father of Eddie Murphy.  This is where his brother Charlie Murphy gets his name from. Remember Eddie

When you watch the video listen to his voice and you will hear where Eddie gets his from. 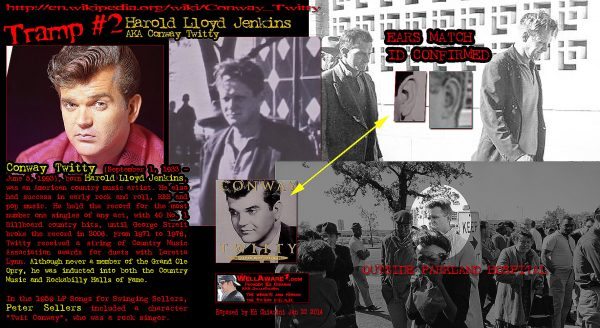 A FEW MORE WELL KNOWNS PLAYING ROLES.  Make sure you note all these musicians are/were good friends during this time.

Search for JFK Assassination on this site to see more.

Don CARTER. A Jimmy Carter/JFK connection??? Or a clue….

Given all the royals involved in this, we can see it was conceived & managed to affect the entire world politic. Just as the creation of Hitler & the Nazis also did. Many agendas fulfilled.

Given all the royals involved in this, we can see it was conceived & managed to affect the entire world politic. Just as the creation of Hitler & the Nazis also did. Many agendas fulfilled.