Roger Joseph Stone Jr    (Claimed Jason instead of Joseph for his middle name…I wonder why?)

Bratton began his police career at the Boston Police Department before becoming Police Commissioner in New York City, where his quality-of-life policy has been credited with reducing petty and violent crime. He was recruited to lead the Los Angeles Police Department in 2002 at a time when the LAPD was struggling to rebuild trust after the previous decade’s Rodney King videotaped beating, Los Angeles riots, O.J. Simpson murder case‘s perjury by former LAPD detective Mark Furhman and Rampart scandal, and presided over an era of reform and crime reduction.[4] Bratton has served as an advisor on policing in several roles, including advising the British government.[5] In January 2014, Bratton returned to the post of Police Commissioner in New York City,[6] and served until September 2016.[7]

Bratton’s policing style is influenced by the broken windows theory, a criminological theory of the norm-setting and signalling effect of urban disorder and vandalism on additional crime and anti-social behavior.[8][deprecated source] He advocates having an ethnically diverse police force representative of the population,[9] tackling police corruption,[8] being tough on gangs and having a strict no-tolerance of antisocial behavior.[10]

Bratton became the chief of the New York City Transit Police in 1990.[12] In 1994, Bratton was appointed the 38th Commissioner of the New York City Police Department (NYPD) by Mayor Rudy Giuliani. He cooperated with Giuliani in putting the controversial broken windows theory into practice. He introduced the CompStat system of tracking crimes in New York City. Critics have argued that CompStat has created perverse incentives for officers to allow crimes to go unreported,[13] and has encouraged police brutality, citing that complaints by citizens that involved incidents where no arrest was made or summons was issued more than doubled during the Giuliani administration.[14]

Bratton resigned in 1996, while under investigation by the Corporation Counsel for the propriety of a book deal that he signed while in office as well as accepting multiple unauthorized trips from corporations and individuals. These offenses were generally considered minor.[15] Front and center were alleged personal conflicts with Giuliani, partly due to Giuliani’s opposition to some of Bratton’s reforms and partly due to Giuliani’s belief that Bratton was getting more credit for the reduction in crime than Giuliani.[16]

Bratton returned to Boston in 1970 to start a police career in the Boston Police Department, and was sworn in as an officer in October 1970. He was promoted to sergeant in July 1975 and to lieutenant in March 1978. While serving as a Boston Police Officer, Bratton earned a Bachelor of Science in Public Service/Public Administration in 1975 from Boston State College (later absorbed by the University of Massachusetts-Boston).[11]

In October 1980, at the age of 32 and ten years after his appointment to the BPD, Bratton was named as the youngest-ever Executive Superintendent of the Boston Police, the department’s second highest post. He was dismissed as executive superintendent after he told a journalist that his goal was to be the Police Commissioner. He was reassigned to the position of Inspector of Bureaus, a sinecure which was responsible for liaison with minority and LGBTQ communities. He was later brought back into police headquarters to handle labor relations and 9-1-1 related issues.

Between 1983 and 1986 Bratton was Chief of Police for the Massachusetts Bay Transportation Authority, following which he became Superintendent of Boston’s Metropolitan District Commission Police. Bratton was Superintendent in Chief of the Boston Police Department from 1992 until 1993, then he became that city’s 34th Police Commissioner. He holds the Department’s highest award for valor.

The experiences of Bratton and New York Deputy Police Commissioner Jack Maple were used as the inspiration of the television series The District.[citation needed] 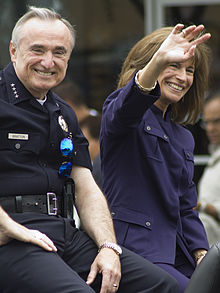 Bratton worked as a private consultant with Kroll Associates, also known as LAPD’s Independent Monitor,[17] until his appointment by the Mayor of Los Angeles James Hahn as the LAPD’s 54th Chief of Police in October 2002. Bratton was one of three candidates recommended to Hahn by the Los Angeles Police Commission under Commission President Rick J. Caruso.[18] Under Bratton’s tenure, crime within the city dropped for six consecutive years.[19]

On June 19, 2007, the Los Angeles Police Commission re-appointed Bratton to a second five-year term, the first reappointment of an LAPD chief in almost twenty years.

Bratton has been criticized for his extensive travel; in 2005, he was out of town for a full third of the year on both official and personal business.[20] (I wonder what Stone was doing at the same time?)

In March 2009, Councilman Herb Wesson proposed an amendment[21] to the City Charter, allowing Bratton to serve a third consecutive term as Police Chief.

On September 11, 2009, he was awarded with the honorary title of Commander of the Most Excellent Order of the British Empire by Queen Elizabeth II “in recognition of his work to promote cooperation between US and UK police throughout his distinguished career”.[22]

On August 12, 2011, Bratton said he was in talks with the British government to become an adviser on controlling the violence that had affected London the prior week. He said he received a phone call from U.K. Prime Minister David Cameron, and that he would continue speaking with British officials to formalize an agreement.[23] Bratton was approached by British Prime Minister David Cameron to become the new Metropolitan Police Commissioner in July 2011, but Theresa May and the Home Office said that the commissioner was required be a British citizen.[24] Bratton instead was offered an advisor role to the British government, which he accepted in August 2011.[5]

After stepping down from his post in Los Angeles, in 2009, he moved back to New York City to take a position with private international security firm Altegrity Risk International.[30] He became the chairman of Kroll, a corporate investigations and risk consulting firm based in New York City on September 16, 2010. In November 9, 2012, Bratton stepped down as Chairman and was retained by Kroll as a Senior Adviser.[citation needed]

In 2010 he was sworn in as a new member of the Homeland Security Advisory Council.[31]

Stone was born  Roger Joseph Stone Jr.  on August 27, 1952,[30] in Norwalk, Connecticut,[40] to Gloria Rose (Corbo) and Roger J. Stone.[41] He grew up in Lewisboro, New York. His mother was a small-town reporter, his father a well driller[42] and business owner. He has described his family as middle-class, blue-collar Catholics.[40]

Stone was for many years a lobbyist for Donald Trump on behalf of his casino business[31] and also was involved in opposing expanded casino gambling in New York State, a position that brought him into conflict with Governor George Pataki.[66]

In February 2010, Stone became campaign manager for Kristin Davis, a madam linked with the Eliot Spitzer prostitution scandal, in her bid for the Libertarian Party nomination for governor of New York in the 2010 election. Stone said that the campaign “is not a hoax, a prank or a publicity stunt. I want to get her a half-million votes.”[79] However, he later was spotted at a campaign rally for Republican gubernatorial candidate Carl Paladino,[80] of whom Stone has spoken favorably.[81] Stone admittedly had been providing support and advice to both campaigns on the grounds that the two campaigns had different goals: Davis was seeking to gain permanent ballot access for her party, and Paladino was in the race to win (and was Stone’s preferred candidate). As such, Stone did not believe he had a conflict of interest in supporting both candidates.[82] While working for the Davis campaign, Warren Redlich, the Libertarian nominee for Governor, alleged that Stone collaborated with a group entitled “People for a Safer New York” to send a flyer labeling Redlich a “sexual predator” and “sick, twisted pervert” based on a blog post Redlich had made in 2008.[83] Redlich later sued Stone in a New York court for defamation over the flyers, and sought $20 million in damages. However, the jury in the case returned a verdict in favor of Stone in December 2017, finding that Redlich failed to prove Stone was involved with the flyers.[84]

Stone volunteered as an unpaid adviser to comedian Steve Berke (“a libertarian member of his so-called After Party”) in his 2011 campaign for mayor of Miami Beach, Florida in 2012.[85] Berke lost the race to incumbent Mayor Matti Herrera Bower.[86]

MY TAKE ON IT

My opinion is that Bratton receiving the highest award a non British person can get from the Queen (Henry Winkler also has the same honnor) and due to Stones association with another exposed Royal Infowars Alex Jones and the trouble he seems to attempt to drum up in the minds of the public, I would conclude that Stone/Bratton is an agent of the Queen.  His mission is to undermine the fabric of the American public and cause the anti government movement to grow in numbers.  All this while he is creating content for the royal printing presses that their networks need to push their agenda on the public while generating a profit.

Hollywood is known in bed with the government so this is not far fetched a theory.  The ties to NY and being a police commissioner correlates directly with many US presidents who were police commissioner of NY at one point in their careers.  Teddy Roosevelt being one of the big ones who I have exposed as being a direct descendant of Kaiser Wilhelm.