Over his desk, Edison displayed a placard with Sir Joshua Reynolds’ famous quotation:

“There is no expedient to which a man will not resort to avoid the real labor of thinking.”

So I will ask you to put on your thinking caps as you review the following photographic evidence that Thomas Edison was a character played by the same actor that played the 29th President of the United States, Warren G. Harding.

It’s a tale about greed, family connections, and the zealous pursuit of power.  Electrical power at first.  A story extracted from the unwritten historical volume that may correctly be titled “The Patent Pirates”. 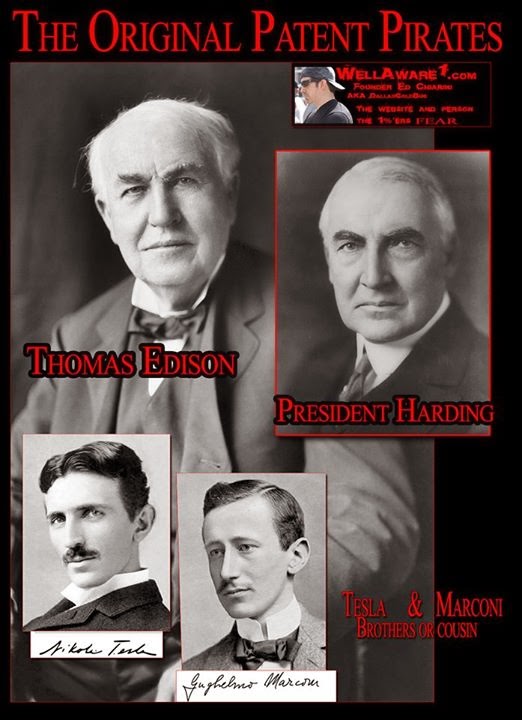 Thomas Alva Edison (February 11, 1847 – October 18, 1931) was an American inventor and businessman. He developed many devices that greatly influenced life around the world, including the phonograph, the motion picture camera, and a long-lasting, practical electric light bulb. Dubbed “The Wizard of Menlo Park”, he was one of the first inventors to apply the principles of mass production and large-scale teamwork to the process of invention, and because of that, he is often credited with the creation of the first industrial research laboratory.

Edison was a prolific inventor, holding 1,093 US patents in his name, as well as many patents in the United Kingdom, France, and Germany. More significant than the number of Edison’s patents was the widespread impact of his inventions:electric lightand power utilities, sound recording, and motion pictures all established major new industries world-wide. Edison’s inventions contributed to mass communication and, in particular, telecommunications. These included a stock ticker, a mechanical vote recorder, a battery for an electric car, electrical power, recorded music and motion pictures.

His advanced work in these fields was an outgrowth of his early career as a telegraph operator. Edison developed a system of electric-power generation and distribution to homes, businesses, and factories – a crucial development in the modern industrialized world. His first power station was on Pearl Street in Manhattan, New York.

Thomas Edison was born in Milan, Ohio, and grew up in Port Huron, Michigan. He was the seventh and last child of Samuel Ogden Edison, Jr. (1804–1896, born in Marshalltown, Nova Scotia, Canada) and Nancy Matthews Elliott (1810–1871, born in Chenango County, New York).  His father had to escape from Canada because he took part in the unsuccessful Mackenzie Rebellion of 1837.  Edison reported being of Dutch ancestry.[8]

In school, the young Edison’s mind often wandered, and his teacher, the Reverend Engle, was overheard calling him “addled“. This ended Edison’s three months of official schooling. Edison recalled later, “My mother was the making of me. She was so true, so sure of me; and I felt I had something to live for, someone I must not disappoint.” His mother taught him at home. Much of his education came from reading R.G. Parker’s School of Natural Philosophy and The Cooper Union.

Edison developed hearing problems at an early age. The cause of his deafness has been attributed to a bout of scarlet fever during childhood and recurring untreated middle-ear infections. Around the middle of his career, Edison attributed the hearing impairment to being struck on the ears by a train conductor when his chemical laboratory in a boxcar caught fire and he was thrown off the train in Smiths Creek, Michigan, along with his apparatus and chemicals. In his later years, he modified the story to say the injury occurred when the conductor, in helping him onto a moving train, lifted him by the ears.

Edison’s family moved to Port Huron, Michigan, after the railroad bypassed Milan in 1854 and business declined; his life there was bittersweet. Edison sold candy and newspapers on trains running from Port Huron to Detroit, and sold vegetables to supplement his income. He also studied qualitative analysis, and conducted chemical experiments on the train until an accident prohibited further work of the kind.

Edison obtained the exclusive right to sell newspapers on the road, and, with the aid of four assistants, he set in type and printed the Grand Trunk Herald, which he sold with his other papers. This began Edison’s long streak of entrepreneurial ventures, as he discovered his talents as a businessman. These talents eventually led him to found 14 companies, includingGeneral Electric, which is still one of the largest publicly traded companies in the world.

Warren Gamaliel Harding (November 2, 1865 – August 2, 1923) was the 29th President of the United States (1921–23), aRepublican from Ohio who served in the Ohio Senate and then in the United States Senate, where he played a minor role.

Harding sought out the “best minds” in his cabinet, including Andrew Mellon at the Treasury, Herbert Hoover atCommerce, and Charles Evans Hughes at the State Department. He rewarded friends and contributors, known as the “Ohio Gang“, with powerful positions. Multiple cases of corruption were exposed during his presidency and after his death, including the notorious Teapot Dome scandal, regarded in pre-Watergate times as the “greatest and most sensational scandal in the history of American politics”.

Domestically, Harding signed the first federal child welfare program, and dealt with striking mining and railroad workers in part by supporting an 8-hour work day. He created the Bureau of the Budget to prepare the first United States federal budget. Harding advocated an anti-lynching bill to curb violence against African Americans, but it failed to pass Congress. In foreign affairs, Harding spurned the League of Nations and negotiated peace treaties with Germany and Austria. His greatest foreign policy achievement came in the Washington Naval Conference of 1921–22, in which the world’s major naval powers agreed on a naval limitations program that held sway for a decade. See the Truth About the FORBES So Called Richest Israeli