Watching videos of the latest protest at the capital, you will see an individual who is one of the organizers directing the show.  Her pseudonym name is Lisa Fithian.

Lisa Fithian is an American political activist and protest organizer. She began her work in the mid-1970s as a member of student government in her high school and at Skidmore College. As a member and coordinator of the Washington Peace Center for seven years during the 1980s, Fithian organized hundreds of events and demonstrations on a range of issues, both locally and nationally, and helped lead an extensive anti-racism process that transformed the Peace Center into a multicultural organization.

In the early 1990s Lisa joined the labor movement, bringing her experience to the Justice for Janitors campaigns in Washington, D.C., Denver, and Los Angeles, and to nursing home workers in San Francisco and Detroit. She also provided training and support work to the United Auto Workers and with the Detroit Newspaper Strikers. Lisa has continued her work for social, economic, and environmental justice, providing training and organizing support to many of the global justice mobilizations around the world since the shut down of the WTO ministerial in Seattle in 1999. After Hurricane Katrina, Lisa worked with the Common Ground Collective in New Orleans, organizing relief efforts. Currently, Lisa serves as a National Steering Committee member of United for Peace and Justice, a coalition of over 1,000 local and national groups working to end the war in Iraq and build a broad movement for social change.

She has written throughout the years including the introduction to the post-9-11 edition of Abbie Hoffman's Steal this Book, and most recently in the book anthology What Lies Beneath: Katrina, Race, And the State of the Nation by South End Press.[

But that is not the only pseudonym she uses.

Lynette Alice "Squeaky" Fromme
(an American criminal best known as a member of the "Manson family." She attempted to assassinate U.S. President Gerald Ford in 1975. She was sentenced to life imprisonment for the attempt but was released on parole on August 14, 2009, after serving nearly 34 years.) That's what they want you to believe.  But we know better than to take what the controllers feed the public as anything close to the fact.

It makes for a good read though.  Over the years you can understand the number of books and documentaries produced on the topic.  The Sharon Tate murders were headline news for months.  They netted hundreds of millions selling this lie to the public.  But as I have stated numerous times they never have just one objective in mind when they create these historical events.  Profit is the primary objective since they need to fund the operation, but another of the multipronged reason they do these productions is to divide and conquer the population.

Getting the public to be opinionated as to what really happened generates a buzz,  throw in a storyline that is conspiratorial by nature, and you can understand how that gives the story longevity.  The longer that story can stay in the minds of the people the more likely they are of buying a book or watching a TV show based on the subject.  Add in a well known Hollywood star, and you have all the necessary ingredients to give the event legs that will go down in the history books and talked about for generations.

If you are not aware of the work I did on the Charles Manson HOAX,

That story needs supporting characters to play the roles so of course after digging I uncovered and identified others involved.

You need to understand that entire made for TV event was a fraud.  No one was killed, No one was jailed, and the lead character Charles Manson was a military Lt. Col.  He is also the sibling of Sharon Tate (the person he and his group were said to of murdered.) When I saw they were claiming he was getting married while in prison I knew that was bullshit because I knew the truth about the fake event.  I decided to look closer at the person they claimed he was marrying.  I immediately applied the rules to this game I have uncovered that apply to all the fake events in the media and started looking at the individual as his relative.  Sure enough, it's his niece.  Once I published this information they immediately called off the so-called wedding, and the story was shelved. 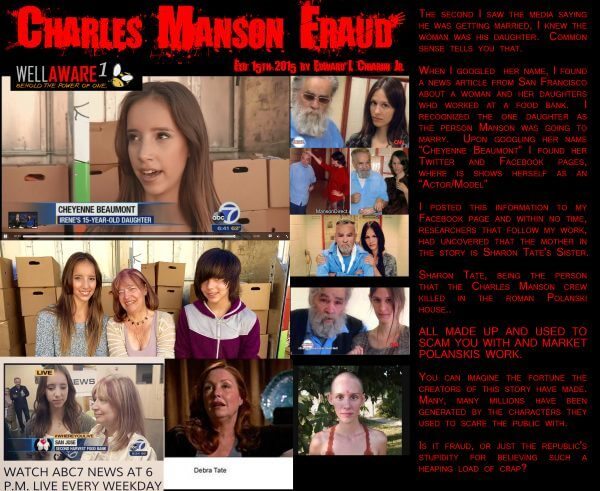 Since that event, he has been spotted playing roles in protests alongside well know family members like Michael Greenberg and Pat Boon who is no stranger to this actor based reality since he also played a US Senator.

You can validate everything I'm saying when you look at the spouse or sibling of the person of interest.  You will see they will be playing the supporting roles right next to them.  This blows the COINCIDENCE explanation out of the water.

Knowing everything I just showed you, the connection between Lisa Fithian as Lynette Squeaky Fromme is made and that would suggest this staged protest of Supreme Court Justice Brett K is just another government planned, scripted out event that just like the Occupied protests and the other events Lisa Fithian has directed are designed to manipulate those who are unstable into acting out violently against law enforcement.  This allows them to identify those individuals easier and arrest them.

Protests do nothing to aid a cause and only make the people who take part in them look like radicals and criminals.  Don't fall for their game people!  The only thing that is real about this type of thing is the real threat to your freedom.  They will label and arrest you if you make any attempt to cause harm to someone.  Don't make it easy for them to silence you by sticking you in jail.  I can tell you this from personal experience!

Of course this is a hoax. Remember everyone, the whole world’s a stage. Even the televised war scenes are fake. They don’t show anything real or altruistic on the news. Great article.