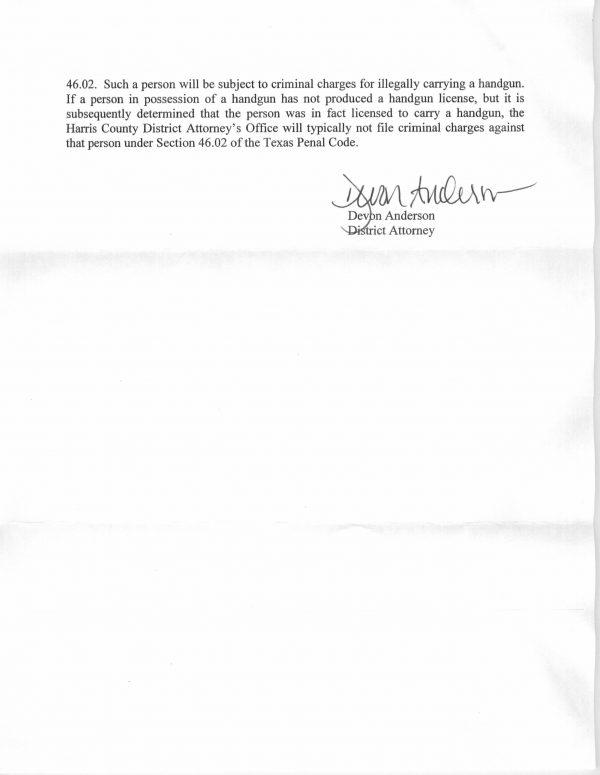 Before Justices MOSELEY, BRIDGES, and LANG–MIERS. J. Brian Dear, for Edward Chiarini. Craig Watkins, for the State of Texas.

Appellant, owner of a condominium unit, carried a handgun in the common area of the condominium complex. The issue before the Court of Criminal Appeal in this matter centered on whether appellant violated the “unlawful carrying weapons” (UCW) statute. Generally, the statute prohibits carrying of a handgun except on “the person’s own premises.” The issue specifically in this case was whether the common area to the condominium complex was part of appellants’ “own premises.” The Court of Criminal Appeals held that appellant did not violate the UCW statute, and affirmed the court of appeals. View “Chiarini v. Texas” on Justia Law

A recent Texas court opinion has clarified that a condominium owner may legally carry a handgun in the common areas without violating the unlawful carrying of weapons statute. The Court of Criminal Appeals issued the holding in Chiarini v. State, construing Texas Penal Code Section 46.02. Mr. Chiarini, a unit owner, did a walkthrough on the common areas with a handgun in a holster on his leg. He was convicted of violating the unlawful carry statute. The court of appeals held that the common areas of a condominium complex are considered a unit owner’s “own premises” under the statute because of the owner’s undivided interest in the common elements.

The laws surrounding guns begin with the Second Amendment of the United States Constitution’s right to bear arms. The Texas Constitution (like most state constitutions) also provides the right to bear arms, subject to the power of the state legislature to regulate the wearing of arms. Texas statutes governing firearms are extremely complex. The legislation includes (like many states) Castle Doctrine and Stand Your Ground statutes (found in Chapter 9 of the Texas Penal Code). The Castle Doctrine generally allows a person to use deadly force as self -defense to an assault, with a presumption that the use of force is reasonable when an intruder is entering their occupied “habitation,“ vehicle, or place of business. The Penal Code defines habitation as a structure adapted for overnight accommodation, including each structure connected with it. In Texas, the Stand Your Ground clause of the statute provides there is no duty to retreat if the person is in a place where they have a right to be.

For the condominium owner, in light of the Chiarini v. State case the Stand Your Ground no duty to retreat extends to the common areas of the condominium project. What about the question of whether or not a unit owner may benefit from the presumption of reasonableness for the use of force from the Castle Doctrine statute? If the owner is present in the unit and the other requirements of the statute are met, the owner will have the presumption of reasonableness. What if the owner is beyond his own unit on the common areas? The definition of “habitation” must be considered. The answer depends on how connected the particular part of the common element is to the owner’s unit. If it is the owner’s limited common element patio/balcony, the presumption is more likely to apply than if the location in question is the common area parking lot. Until my supreme court victory, there were no examples in the books of a situation that tested the statute as it was written. Therefore law enforcement found themselves in a position where they felt justified in arresting a property owner (myself) while on the common ground that I owned.  Just because the law lacked a definition, that would define a person as an owner of the property, even if they were a part owner in common property such as the common grounds of a condominium I was charged.

First, let me state that I did not set out to create this situation for myself that day, and was merely obeying the law as it was written in the books that allow a person to transport their handgun to and from their vehicle in a secure safe manner. That’s what I was doing, but when I was asked to pause in my route to my car, due to the HOA president of my complex was in fear of her life and asked me to stand and wait by her for police to arrive.   She had encountered criminal activity on our property, and the people responsible were threatening her.  I, of course, stood with her until the officers arrived and she was out of harm’s way. What happened next would take me on a journey that has ended in new case law being set by the Supreme Court of Texas.

I was arrested by the arriving officers who believed that I was unlawfully having my handgun in a holster in plain view while I was walking to my vehicle from my place of residence.

I questioned the officer how I was to transport it to and from my vehicle if I didn’t have a concealed handgun license and would be violating the law if I was stopped while concealing my weapon. He told me it didn’t matter what I did, but It was not Arizona and to open carry in the state of Texas was illegal.

I informed him that:

1. That I was not carrying it and was transporting it to my vehicle.

3. I provided him with my first name and gave him my address even though I had done nothing wrong to give him probable cause to detain me for questioning.

4. I allowed him to search my person due to the situation where a weapon was involved and clearly stated he might do so for his safety.

5. I was polite, and courteous with the officers and explained that I was not breaking the law and that I was not legally bound to provide them with my last name, and when questioned I asked them what probable cause did they have that they believe warranted them detaining me for questioning.

Their response was “How did they know if I wasn’t a felon?” I ask them what does a felon look like and why would they assume that I was possibly one? The officer responded with since I was breaking the law and open carrying any weapon that I violated the criminal code of Texas. I informed them a second time that I was in route to my vehicle with the firearm and that it was being transported in a manner which was secure and safe as it clearly states you must do so in that statute.

They disagreed, and I was arrested. I was found guilty by a jury at my trial. An appeal overturned that verdict. The DA appealed that ruling and we ended up arguing in front of the Supreme Court Of the State of Texas when they affirmed that appeals court decision, thus finding me innocent of all charges.

How that decision affects you. Up until that time a person who Co-owned property (let’s say for example a husband and wife Co-own a house and the land that it is on. If one of them walked outside their home with a handgun in a holster on their side as they walked to their car that was parked in their driveway, an officer passing by could stop that property owner, question them, detain and arrest them for violation of the handgun legislation as it was written.

Yes, even if they were standing in their own driveway the Dallas County DA interpreted the law as you are not the owner of that property if you are a Co-owner, and since you can’t do what you want with the property, you are standing on, without the permission of the other owner, you are not in total control as the law stated you must be in.

Ludicrous, I know, but in reality that was the situation, up until my judgment was passed down by the highest court in the State of Texas.

Even the Justices that presided that day questioned the DA about this scenario, to be clear about the DA’s position defending an arrest as lawful and legitimate. The justices were visually disturbed that there was room to twist the statute in a way that gave them the impression they were justified in their arrest.

Well, that was then. Today, thanks to my case, there is an example that can be used by others finding themselves in the same situation as I did, but more importantly, it gives you the owner of your property the right to open carry anywhere on that property you so choose. The case law is clear and is now on the books to be used to protect your rights.

My journey that day was unexpected and very expensive. The way the legal system is set up, I seriously question if there isn’t a better way for a person to defend their innocence without having to spend $25,000 to do so. I was fortunate that the NRA chipped in and covered $5000 of the cost, but that left the balance, in my hands. The alternative of being found guilty and sentenced to a year in jail, was not an option since I had done nothing wrong and believed that I WAS following the law as it was written. I can imagine how many other people have experienced the same situation as I did, but they were unable to afford the price to pay to prove they were innocent as well. Not that I can afford it either, but found myself being supported by fans across the globe who sent me their support. Even with that support, I still have a balance owed to my lawyer (who is the best lawyer, I have ever had the pleasure of dealing with BTW!) So to help offset the cost this fund was created.

Those wanting to show their appreciation for my efforts that ended up with a now defined law that protects your rights on your property may do so via PayPal at the following link.

Thanks to everyone who has contributed to my cause, rest assured that I will continue fighting for the rights of the people till I am unable to fight the fight physically. That I promise you.